The day arrived to test run the tank engine at the Cartagena Military Museum. A rebuild project since 2004, the tank and its engine have been faithfully restored to the specs of its wartime build.

After determining the firing order had been accurately set up 100% in the wrong order (cylinders numbered from the opposite end of the block) and that the ignition set rotated counter-clockwise as opposed to the clockwise design of the rotor set, we had a sort of engine firing…. and backfire!

The petrol soaked rag used to feed fumes directly into the carburettor suffered from the bad timing, lighting the rag

Throwing it onto the floor to stamp on, could work. …..

And the apprentice tried to help, but the rag stuck to his shoe and he hopped around with a flaming foot that luckily was put out before his overalls went up too 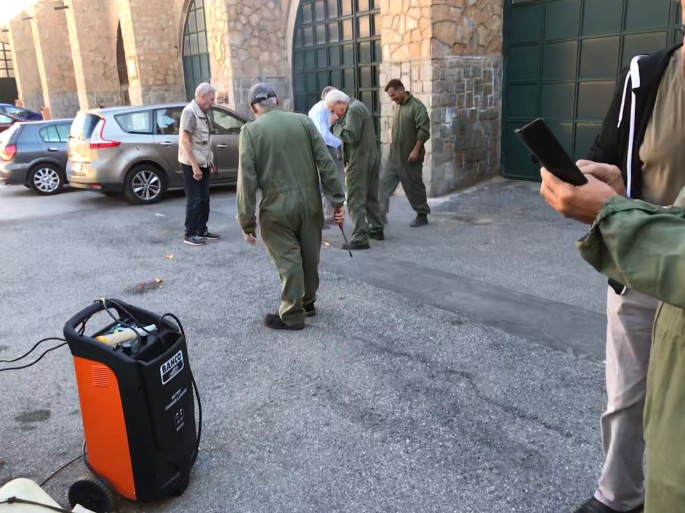 All the Brits took pictures and sang ‘My Sex Is On Fire’.

Nice send off for my drive to UK in the Motorhome that’s going back over there into Karl’s business.

A 06:30 start Thursday morning via Mazarrón Costa, breakfast coffee with Prisci and learn a new word. Wanting a second cup without doing the cup impression to the waiter, I asked the sweet kind helpful Prisci what the expression was for ‘another’. Oh my god’, ‘What have you learnt so far’, ‘, aucho, say aucho’ – lots of self-stabbing movements🤣 I kept sharp instruments off the table just in case after last time I asked the same translation question a dozen times. She smiles and laughs when recreating the scene from sycho but ……

On the road it was not too smooth. My thrill at seeing Barcelona was marred by the two hour traffic queue for a smash-up, 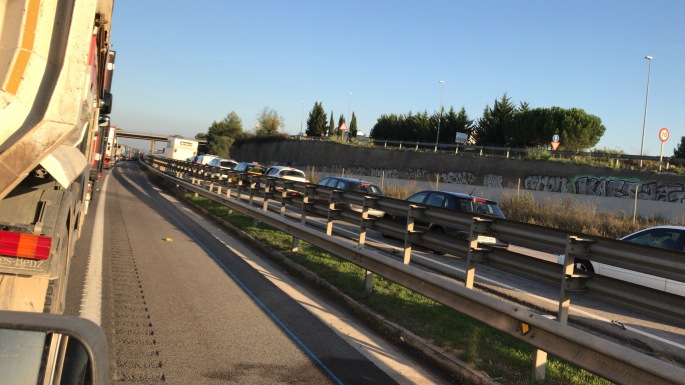 which was pretty much the same at Lyon 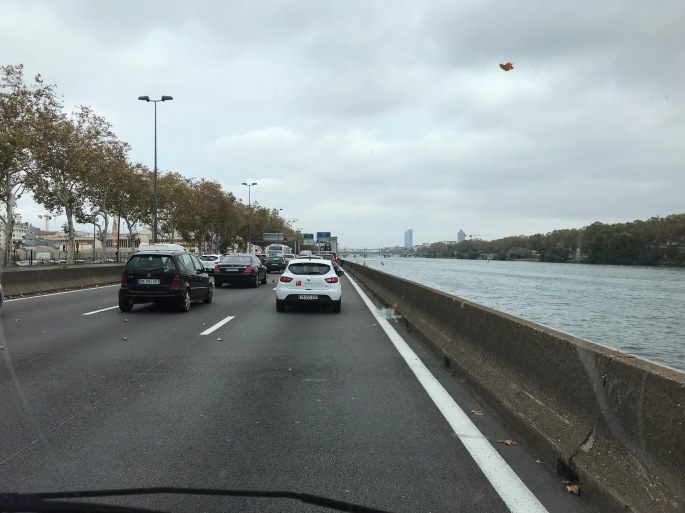 I was driving later in the night to get the lost hours/miles done. The Le Shuttle booking was for Saturday morning and I didn’t want a rebook at half-term prices!

First day was sixteen hours, and an early start needed second day to have some slack time for blog photos and write up.

The rattle and motorhome vibration was becoming more noticeable. Next coffee stop I felt all the wheel bearings, non were hot. The van was vibrating at lower speeds now.

I remembered having an egg in my tyre wall years ago. The bonding of the tyre had failed. Air filled an egg cup size area in the side wall. The wheel became unbalanced and shook the car. Was this similar?

I stopped again, crawled under the car and felt one tyre had a warmer feel on the inside. The shape was bad, the tyre had really deformed on the inner side

I took the spare tyre out ready swop it over.

It looked okay in the rack,  but after rolling it to the side of the van saw it was ready to split. Probably it had lain in wait for too long under the van.

A long night ahead waiting for the tow truck and fitting a new tyre if I found one.  I couldn’t risk driving on the motorway with a tyre ready to blow and speed already below 30 mph. And if I drove along any French unlit roads in the dark and had a blow out I was stranded.

Just after pulling of the toll road I found a hotel with a helpful receptionist. She called a breakdown truck and the long night was under way

after an hour the Motorhome was loaded up, and we left for the garage.

I couldn’t take the suggested option of sleeping in the van and waiting until morning. That would mean missing the train booking and another £211 to pay.

An 05:30 start from the motorway pit stop area, with a top speed of 60mph for the four hour trip that was driven with every digit crossed – made it

Stuff happens, the trip was very different to the plan in my mind. But a fun challenge.

Writing up the blog as I went would have given a better record/account of the trip, but tiredness and a need to keep rolling mean this spartan effort will be all.

Next time will be better. This trip means I miss two Salsa lessons and Artillery Museum work (and I take both so seriously).

One thought on “Flame out, Tyred out”