My house sitting life started three years ago while sat with a reunion beer in Tina and Terrys garden in Fareham. Their neighbours (Becky and Cav) dog took a shine to me and Tina offered me as a sitter when they next went to France caravanning.

From a jokey discussion, the ‘sits’ became my way of life and word spread to Fareham neighbours, Gloucester, Spain and Canada.

Tina introduced me then to Ann and Gordon. Their Shadow became a link between my closest sit to home and the furthest.

A big long haired amiable mate, this Newfoundland was a soothing soul to be with and to stroll alongside in parks, beaches and The Heathfield. My long distance sit two hours north of Toronto in Canada was initiated by Joan who is Newfoundland born.

Shadow has recently passed away, the news from Ann and Gordon not a complete surprise due to his age, but still upsetting to think he won’t be around to lead me along the south coast shoreline and charm everyone he meets. 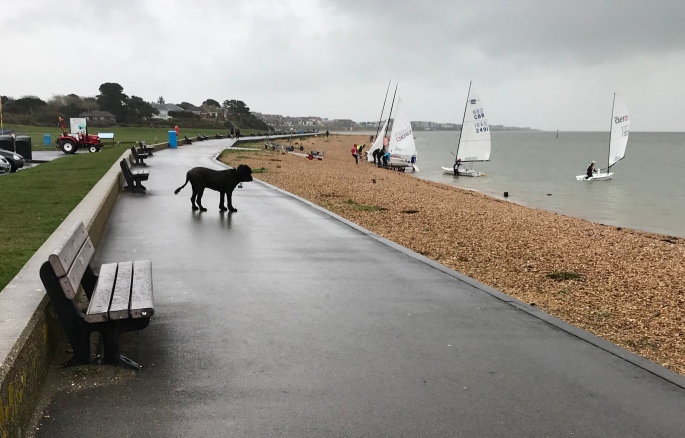 I’m a lifelong non-dog owner, always travelled for work and enjoyed my children’s growing enough to fill any leisure time at home. Sitting for home-owners pets has been the equivalent of enjoying time with other families babies that evokes the phrase “loved them but it’s nice to give them back”.

I wonder if Shadow knew how much I cherished time with him on walks along the beach which were therapeutic, calming and fun to watch during his interaction with other normal sized dogs and their owners. The local pub had water and treats for him and admiring staff as I watched with a Guinness before completing the circuit.

The big guy coming to remind you it was five-o-clock and he would appreciate his 1Kilogram of meat please, will be a quiet time in his household now. Failing to respond to that big face in yours wasn’t an option, those eyes were gentle but insisting.

The tale of his time with the new robot hoover is my favourite hound one.

“Gordon explained I was to shut the hall door to the conservatory of a night, as Shadow was nervous of the small robotic vacuum cleaner scurrying around the room. When Shadow first saw the machine noisily charging about with its light flashing he unfortunately had an upset stomach at the time.

Frightened and bloated, Shadow discharged fluids on the wooden floor. The robot then happily spread the muck over the entire purpose built Polish imported room. The following morning Ann and Gordon were greeted with a brown carpet that smelt worse than it should, as the underfloor heating had baked the diarrhoea. The hardened, baked spread had to be chipped of the floor”.

My last sit with him was just after his hair was shorn off to help a skin condition, apart from his head and tail. The times he was described as a black lion was innumerable.

Goodbye Shadow, he will be badly missed by Ann and Gordon and a massive crowd who knew him 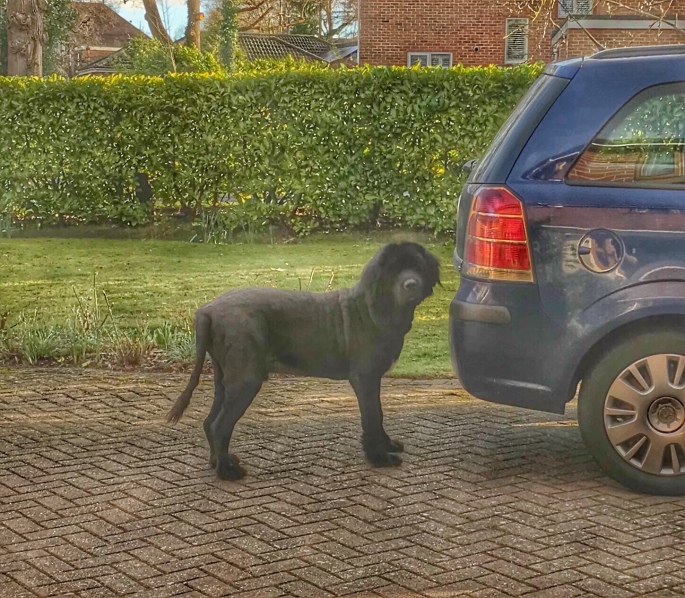